Professor Adrie Steyn is a member of AHRI faculty, and heads up a lab at the institute. He also retains a position and a research programme at the University of Alabama at Birmingham (UAB). He has a background in molecular genetics, with specific in-depth training and expertise in Mycobacterium tuberculosis (M. tuberculosis) virulence and pathogenesis using different animal models. Adrie did his PhD in yeast genetics at Stellenbosch University, and went on to postdoctoral positions at the Albert Einstein College of Medicine and Harvard University, where he studied the genetic mechanisms of M. tuberculosis virulence and persistence. He joined the department of microbiology at UAB in 2003. In 2011 he joined the KwaZulu-Natal Research Institute for TB-HIV (K-RITH) as its first principal investigator.

Adrie has laid the groundwork for developing novel tools and approaches for studying M. tuberculosis redox homeostasis during infection and studying the effect of NO, CO and hypoxia on M. tuberculosis persistence in vivo. His team has more recently discovered a novel mechanism of action of the antimycobacterial drugs bedaquiline, clofazimine and Q203, which targets energy metabolism in M. tuberculosis. He has inaugurated a formal collaboration with the cardiothoracic surgical team at the Inkosi Albert Luthuli Central Hospital and leads efforts for the Human Lung Project; established to collect resected lung tissue samples from TB patients.

Get in touch with Adrie via adrie.steyn@ahri.org 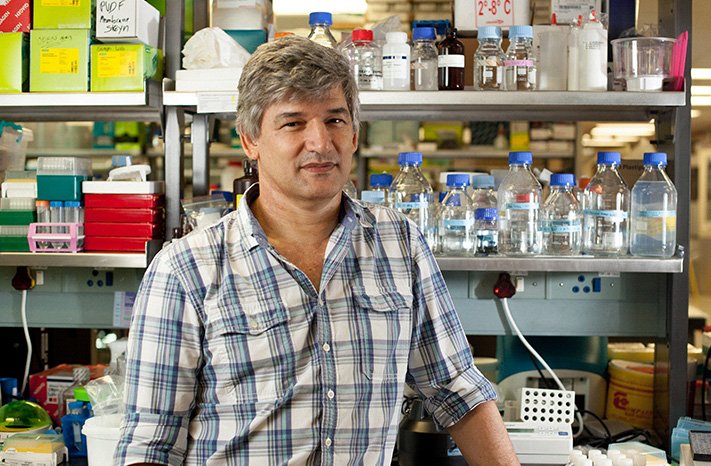 The main goal of Dr Adrie Steyn’s research group is to understand the mechanisms whereby Mycobacterium tuberculosis (M. tuberculosis) persist for decades without causing disease, to then suddenly explode.

M. tuberculosis is the bacterium that causes TB in the lungs. Despite years of investigation and research, scientists and health practitioners today are still struggling to control and eradicate the TB epidemic. This is especially true when we try to combat persistent bacilli (the bacteria that continue to survive in the host in the presence of drugs). Persistence has been a major problem in M.tuberculosis management due to a limited understanding of the nature and mechanism of persisters. During persistence, tuberculosis enters a metabolically shutdown state which makes it difficult for anti-TB drugs to penetrate the waxy cell wall material.

The Steyn Group is currently working on several projects centred on host gasotransmitters such as nitric oxide (NO), carbon monoxide (CO) and hydrogen sulphide (H2S), and M. tuberculosis redox homeostasis and bioenergetics, the role it plays in latency and persistence of the mycobacterium inside the human host, and how this information can be translated into clinical uses. The mouse model for TB, as well as freshly resected human TB lung tissue, are routinely used by the Steyn group. The research group also uses extracellular metabolic flux analysis technology to measure the change in oxygen consumption rate of mycobacteria and infected host cells under different extracellular conditions (pH, carbon source, etc.). The long-term goal is to examine the mechanisms whereby M. tuberculosis reprograms host energy metabolism. The lab also investigates how this technology can be used in anti-tuberculosis drug and clinical isolate susceptibility screens.

Mohammed Aejazur Rahman received his BSc degree in Biotechnology and completed his Masters in Biological Science at the Indian Institute of Science, Bangalore. Aejaz’s current work focusses on host-pathogen interactions and signalling mechanisms during TB infection in the mouse model and in human lung tissue. He is also studying immunological responses mediated through soluble secretory antigens of M.tb that target the nuclei of host cells in the mouse model.

Jared was awarded his PhD in 2017 while working in the Bioengineering Lab at AHRI. His PhD looked at drug resistance mechanisms of Mycobacterium tuberculosis using novel microfluidics technology. Jared has also been a Postdoctoral Research fellow at AHRI in Dr Adrie Steyn’s group, where he was studying the effects of drugs on the Mycobacterium tuberculosis energy metabolism.

Kievershen Nargan is qualified and registered with the HPCSA as a biomedical technologist (Histopathology). His work includes the reception, macroscopic appraisal and processing, microtome sections, histochemical staining (routine and special), immunohistochemistry as well as molecular biology of human lung specimens. Kievershen is also currently completing his Bachelor of Commerce degree.

Kapongo Lumamba has a BSc Degree in Computer Science and is currently completing his Honours degree in Computing. His work involves web applications design and development, database development and maintenance, photography and graphic design and post mortem documentation to name just a few. Kapongo is also Comrades Marathon medalist.

Gordon was awarded his PhD in Biochemistry from the University of Pretoria. His research has mostly focused on the application of molecular modelling to drug discovery (malaria, neurotransmission, coenzyme A biosynthesis). He has recently transitioned into image analysis and is interested in all aspects of computational biology and how best to apply them to disease research.

Zainab completed her Masters in Biochemistry in 2019, which focused on a potential malaria vaccine candidate. She joined AHRI in July 2019 as a research lab technologist in Professor Adrie Steyn’s lab, working on TB and SARS-CoV2 bioenergetics in host cells.