The Africa Health Research Institute (AHRI) is pleased to announce the appointment of Professor Olive Shisana and Professor Peter Piot to its Board of Directors.

Shisana and Piot join seven other directors on AHRI’s Board. They will serve for an initial period of three years.

AHRI Director, Professor Deenan Pillay, says the institute is privileged to have Shisana and Piot join the Board. “It is a mark of AHRI’s potential that we have been able to attract such global leaders to commit to such an important role in our future development. Their experience of the national, regional and international research and policy environment will significantly enhance the support provided by the Board to our Institute, and sets us on track for further growth and impact.”

Professor Olive Shisana is a public health professional with expertise in the epidemiology and risk factors of HIV. She has a wealth of research, management and policy development experience. Prof Shisana was the first Director General for the Department of Health in South Africa under the Mandela Administration. She was CEO of the Human Sciences Research Council from 2005 to 2015, and served as executive director of the World Health Organisation’s (WHO’s) Family and Community Health cluster in Geneva, where she oversaw programmes dealing with HIV/Aids, reproductive health, women’s health and child and youth development. Prof Shisana holds a Doctor of Science degree from Johns Hopkins University. She has been principal or co-principal investigator on several ground-breaking national and provincial studies aiming to improve understanding of HIV/Aids dynamics in South Africa. She is an Honorary Professor at the University of Cape Town, a former Professor of the Medunsa School of Public Health and a founder of the University of the Western Cape Public Health Programme. In 2013 she was awarded the Academy of Science of South Africa’s ‘Science for Society’ Gold Medal award. She is currently the President and CEO of Evidence Based Solutions, a privately held policy, research and ICT firm. 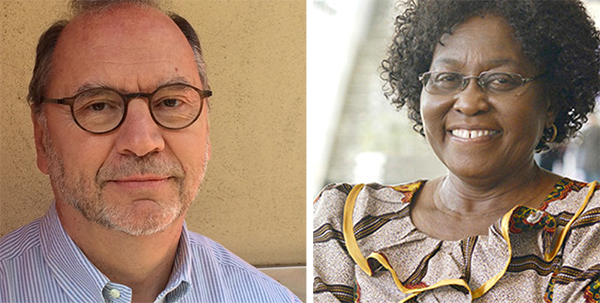 Professor Peter Piot is the Director of the London School of Hygiene & Tropical Medicine and is a Professor of Global Health. He was the founding Executive Director of UNAIDS and Under Secretary-General of the United Nations from 1995 until 2008, and was an Associate Director of the Global Programme on Aids of the WHO. Under his leadership UNAIDS became the chief advocate for worldwide action against Aids. Prof Piot has a medical degree from the University of Ghent and holds a PhD in Microbiology from the University of Antwerp. His main research areas have been on clinical, microbiological, epidemiological, and public health aspects of haemorrhagic fevers, sexually transmitted diseases, Aids, tuberculosis, and women’s health in Africa, and, more recently, on policy and politics related to Aids, Ebola and global health. In 1976 he co-discovered the Ebola virus in Zaire while working at the Institute of Tropical Medicine in Belgium. Piot has received the Noguchi Africa Award and the Canada Gairdner Global Health Award and was recently awarded an honorary knighthood KCMG.

More about the AHRI Board of Directors

The AHRI Board comprises seven Directors who are leaders in medical research and related scientific fields, one Director with an extensive auditing and risk management background and one with expertise in international research institute governance. The Board meets twice a year and is tasked with reviewing and authorising major institute decisions. Professor Hoosen (Jerry) Coovadia currently serves as the Board’s interim chairman.

The AHRI Board of Directors is: