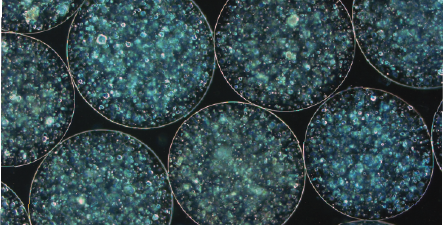 Cutting-edge tuberculosis (TB) research using human lung samples and three-dimensional bioengineering techniques to replicate the lung environment has revealed the important role of a subset of immune cells in the lung in fighting TB. The cells, called T Helper 17 cells, or Th17, have been found to be important in animal models of TB, but are rarely detected in the blood of humans and so their importance in human disease has not been clear until now.

The study, a collaboration by researchers at Africa Health Research Institute (AHRI) in South Africa and the University of Southampton in the UK, is recently published in The Journal of Clinical Investigation.

TB, a bacterial disease that mainly affects the lung, remains one of the leading causes of death in South Africa, and the World Health Organisation estimates that in 2019 1.4 million people died from the disease globally. Despite this, an effective vaccine for adults is yet to be developed, although results from two recent vaccine trials have been cause for renewed optimism. Vaccination works by stimulating the immune system, a highly complex network of cells and molecules that together provide the flexibility needed to deal with the huge array of different microbes assaulting our bodies on a daily basis. One of the challenges in developing new and improved vaccines is figuring out exactly the right type of immune response you need to generate. Most research into this question is done either in animals, or by studying human blood. But a growing body of research suggests we may find better answers to the question of what a protective immune response looks like at the site of disease, in the human lung tissue itself.

Through a unique collaboration with cardiothoracic surgeons and patient donors at Durban hospitals, AHRI researchers have access to samples of lung tissue removed during life-saving surgical procedures called lung resections. For this study, the research team set out to get a clearer picture of the immune response in TB infected lung tissue. They found that the type of immune cells in TB-infected lung were significantly different than what is seen in the blood. In particular, they found Th17 cells were highly enriched in the lung. This subset of immune cell is important for fighting fungal pathogens, and has recently been shown to play an important role in fighting TB in non-human primates. Up until now, however, it was thought this type of cell did not play a role in the human TB immune response, because the cells are hard to detect in blood. The collaborating team in Southampton then used their three-dimensional ‘tissue-like’ culture system, which mimics the environment of human lung tissue, to test the behaviour of the cells. They found that the presence of IL-17, the molecule that Th17 cells produce, reduces the growth of TB bacteria. This data confirms that Th17 cells are likely to have a protective role in humans and gives researchers a new focus for vaccine strategies. 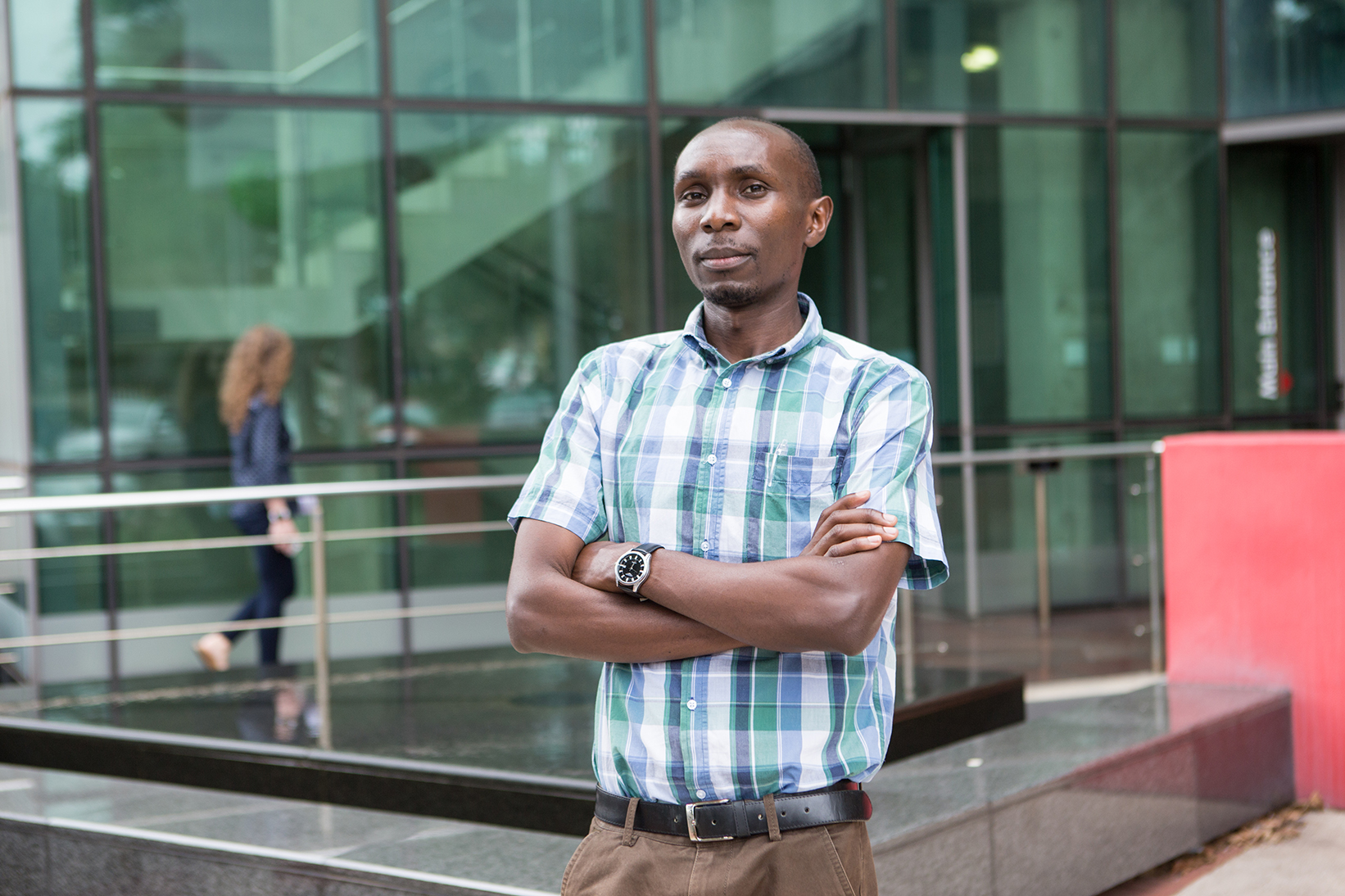 “This work underlines the importance of studying disease in the tissue where it manifests, in this case the lung, and not only in the blood,” said Dr Paul Ogongo, the lead author on the paper, whose doctorate work at AHRI the paper was based on. “There is a strong case that the slow progress in TB control strategies could be, in part, because we have been studying TB in the ‘wrong place’.” Dr Ogongo joined AHRI from the Institute of Primate Research in Kenya and is now based at the University of California, San Francisco, in Prof Joel Ernst’s group where his work on the human TB immune response continues.

“I am delighted that the system I developed is now helping to unpick protective responses to TB to inform new approaches,” added Dr Liku Tezera, a co-author on the paper based at the University of Southampton, who developed the 3D bioengineered cell culture model. 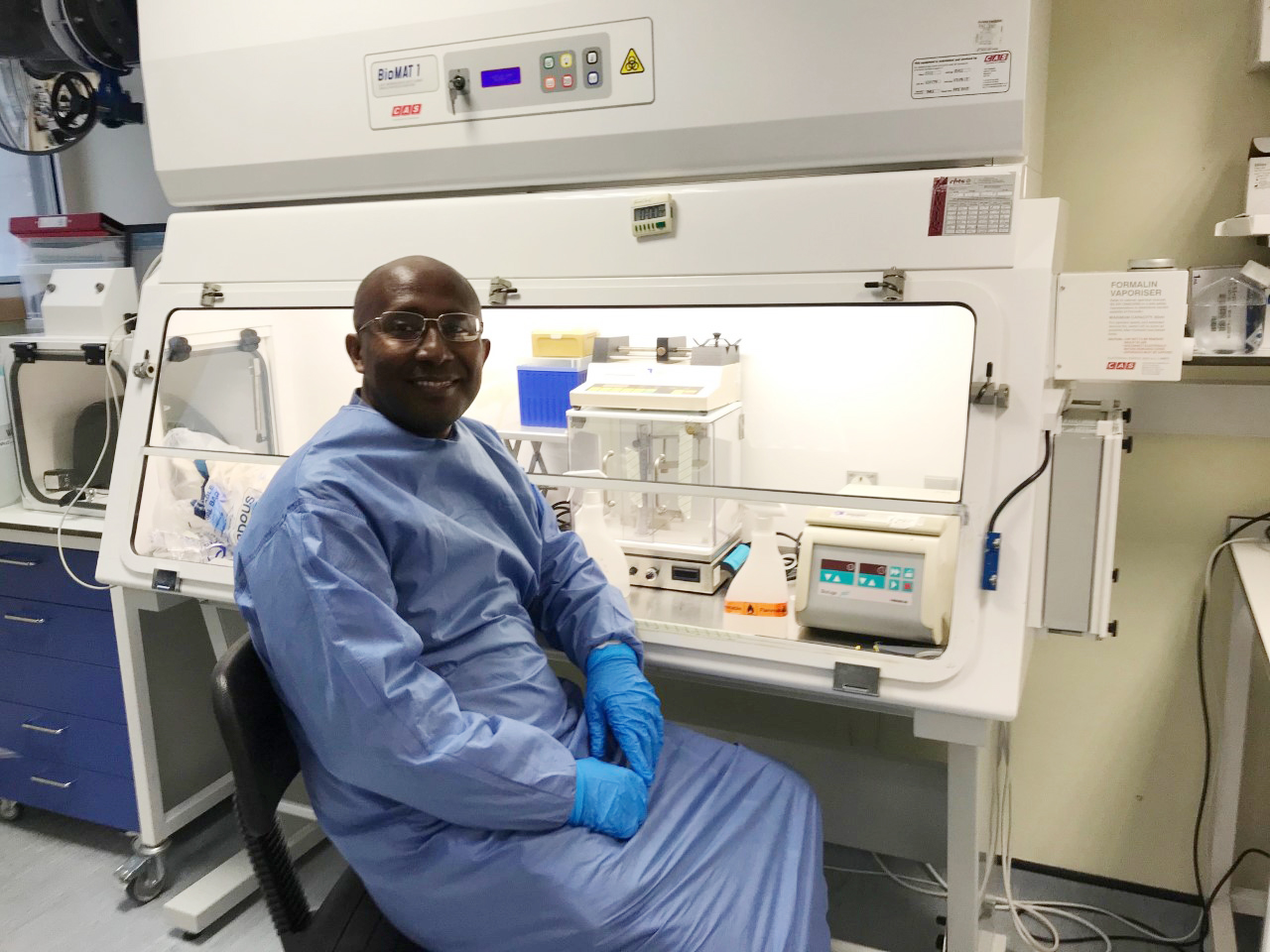 (Above: Co-author, Dr Liku Tezera, in the lab at the University of Southampton)

“Our longstanding collaboration and two-way technology transfer with the University of Southampton has enabled these important findings,” said AHRI Faculty member and senior author on the paper, Dr Al Leslie. “The cutting-edge tissue culture technologies developed by their group have been transferred to AHRI, meaning we can run these experiments here. In turn, due to the high burden of disease in South Africa and our dedicated clinical collaborators, led by Dr Raj Madansein, we are able to access the lung tissue that makes these discoveries possible.”

(Top photo: Detail from an image of the 3D ’tissue like’ culture system, developed by Dr Liku Tezera)