The K-RITH Tower Building has been named a regional winner in the South African Institute of Architects (SAIA) KwaZulu-Natal Awards programme. The awards are the highest local recognition of excellence in architecture.

The K-RITH Tower Building, designed by FGG Architects, is one of five regional award winners for 2017.

Africa Health Research Institute (AHRI), the Institute which emerged from the union of the Africa Centre for Population Health and K-RITH, is the anchor tenant of the building on the University of KwaZulu-Natal’s (UKZN) Nelson R. Mandela School of Medicine campus.

The building has eight floors. The ground floor has a number of multipurpose spaces such as seminar rooms and a coffee shop. Office spaces take up the second and third floors, with AHRI laboratories on the fourth to seventh floors. The top floor is dedicated to services. The winged roof of the four-storey high atrium is a tribute to the US aviator and philanthropist Howard Hughes (1905-1976); his eponymous Howard Hughes Medical Institute funded the project. 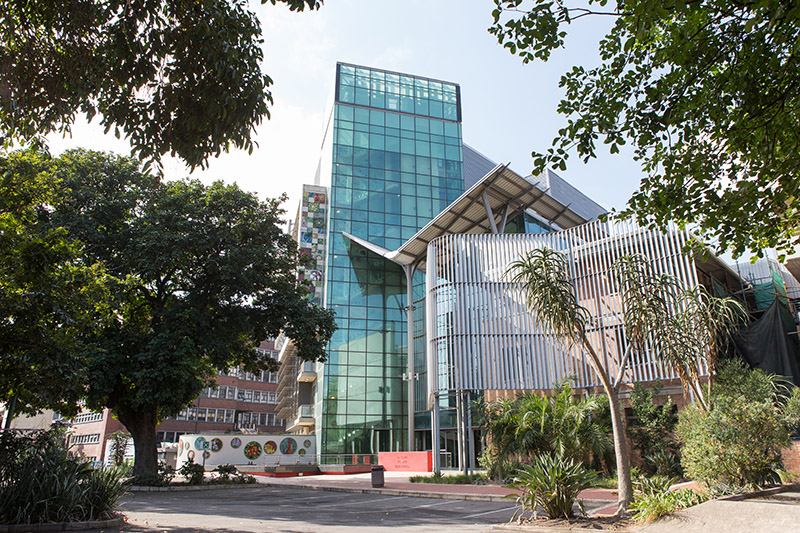 Acclaimed artist Jane du Rand’s striking ceramic and mosaic installation on the outside walls, floor of the atrium and main stairwell, reflects the work that happens in the building. The artist took inspiration from symbols of healing from different cultures, and looked at the structure and shape of viruses, blood cells and bacteria. Indigenous plants with medicinal and healing properties also make up the installation.

“From its earliest conception the K-RITH Tower Building was a project which was carefully planned and designed to meet every eventuality, including the building’s resilience to earthquakes and the protection of the researchers and campus community from dangerous pathogens,” said AHRI COO, Costas Criticos. “Every detail was considered in terms of its functionality to enable TB and HIV scientific research, and yet it is a building which is a beautiful and uplifting building. I feel very proud to work in such an iconic building which has architecturally unified the campus and has given the campus a significant centre of gravity.”

“We are proud to have designed the K-RITH Tower Building, and it is a great honour to receive recognition from one’s peers for our work,” added Patrick Hathorn from FGG Architects. “It was an exciting opportunity to create structures that would transform UKZN’s medical school grounds from a congested collection of dated buildings and parked cars to what it is today. Despite the many challenges imposed by a cramped site and the technically complex nature of the building, the K-RITH project was able to create additional open space on campus and deliver world class facilities to aid in the combat of far greater challenges faced by mankind.”