The event formed part of a research dissemination and public engagement project relating to five recent scientific studies, which were focussed on the health and health-related challenges children, adolescents and young adults living in uMkhanyakude district face.

For the past three weeks, AHRI scientists worked with 30 learners from neighbouring high schools, together with a sound engineering crew and with expert input from public engagement specialists from Jive Media Africa, to develop the core findings of the research into five unique songs.

The scientific studies had a common theme relating to the health of young people. This included a research project exploring young people’s vision of and hope for the future; the rate of TB infection among children and teenagers; how young people experience health services; young people’s experiences of moving from a rural to an urban environment – as well as a study on sexually transmitted and reproductive tract infections among young men and women. Through the ‘Hip Hop U’ programme it is hoped that the learners gain knowledge and skills and start to become active agents for change in their communities. The process replicates the science research cycle, giving young people a sense of their own power in responding to challenges through research and dissemination of findings.

On Saturday afternoon, the learners from Nkodibe Secondary School, Ikusasalethu Secondary School, Nomathiya Technical High School, Inkosi Mgwazeni Secondary School and Umfolozi High School performed the songs on stage at AHRI in front of their family, friends, teachers, AHRI staff and other young people. The songs were professionally recorded and will be broadcast on community radio stations. 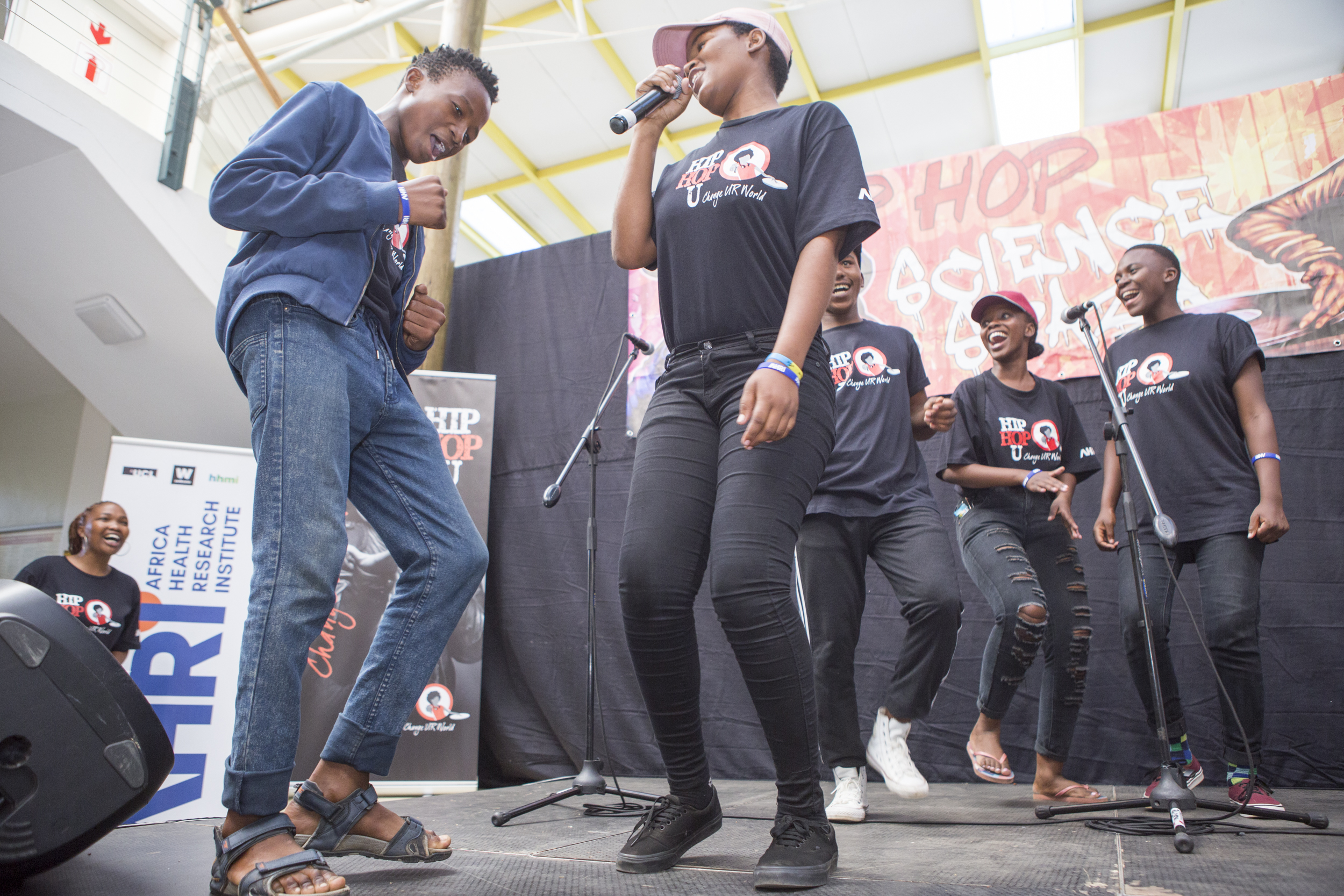 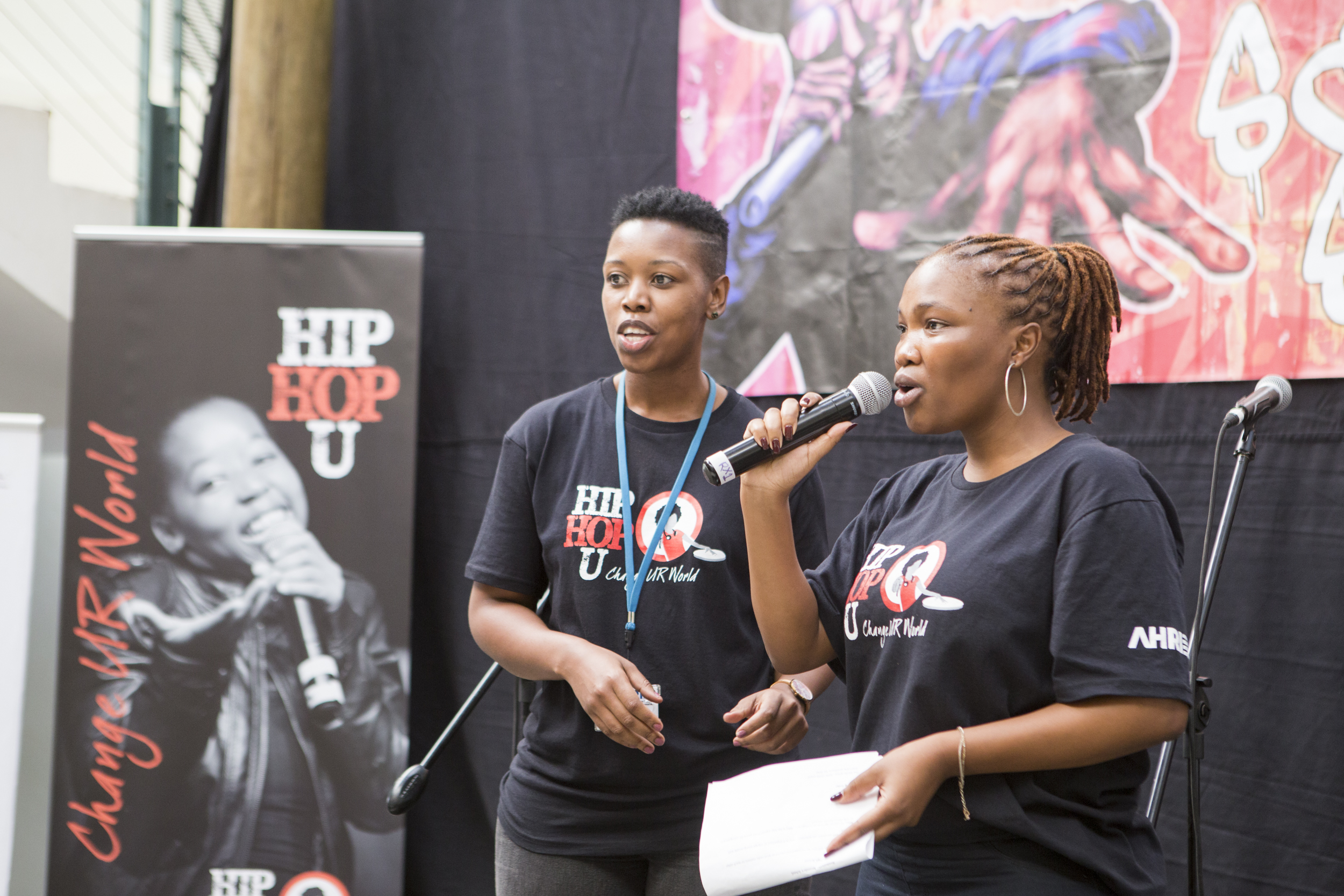 “It has been a long journey, but I have enjoyed every second of it!” said Xoliswa Mazibuko from Nomathiya Technical High School. Her group, called ‘Silver Gang’, composed a song about TB. “I learnt that TB can be curable, but you need to know your status – you need to get checked.”

.@hiphopuZA is underway! First up ‘Silver gang’ with their song ‘Feel alright’ about TB, getting tested & getting on treatment. #teenhealth pic.twitter.com/bkgSoBnk6w

On the day, AHRI also hosted a small ‘science fair’ for the visitors, which included discussions about the work that the institute does, video screenings, and a laboratory tour. 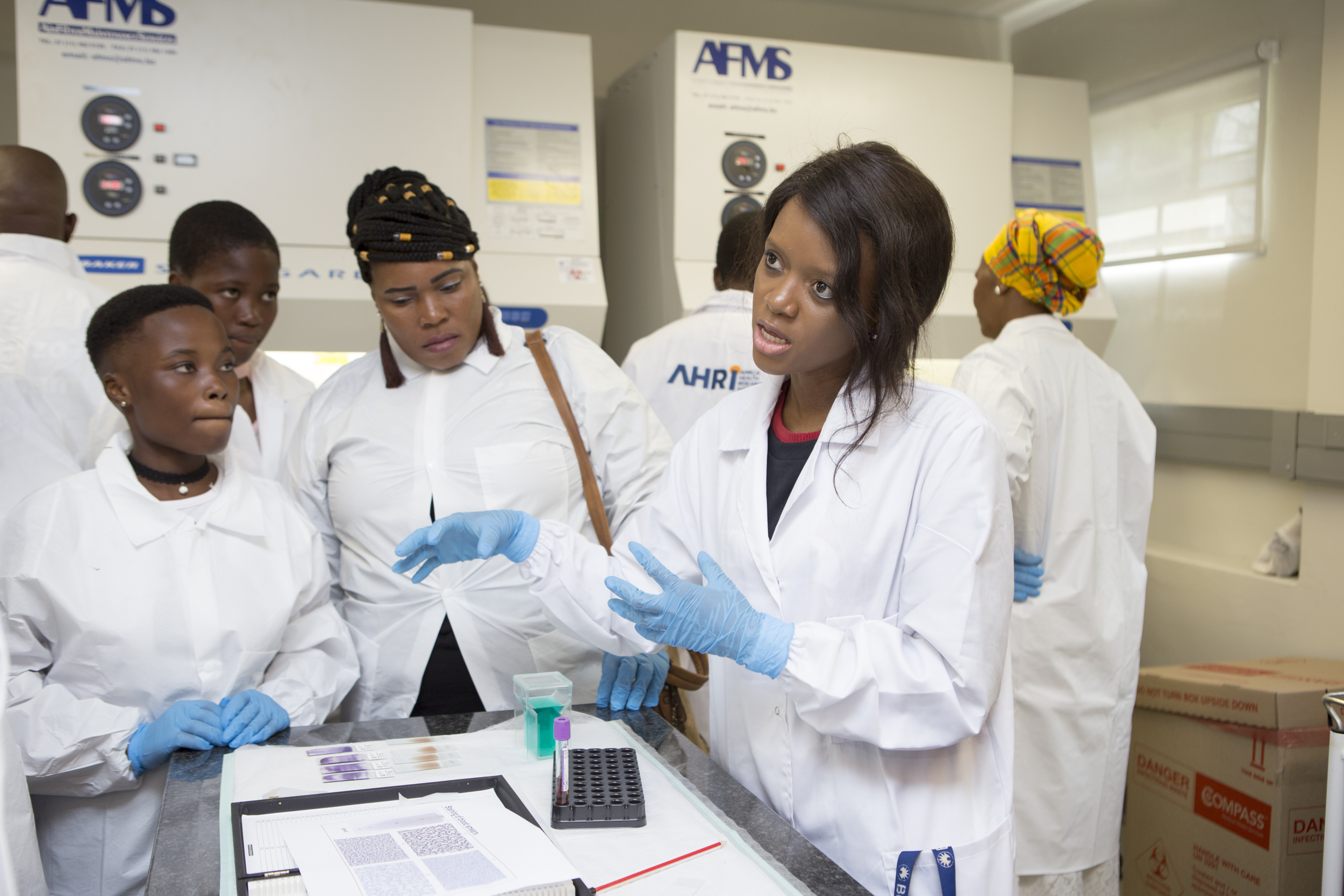 Above: AHRI Laboratory Supervisor Zizile Sikhosana demonstrating some of the work the lab does to visitors during the AHRI science fair. 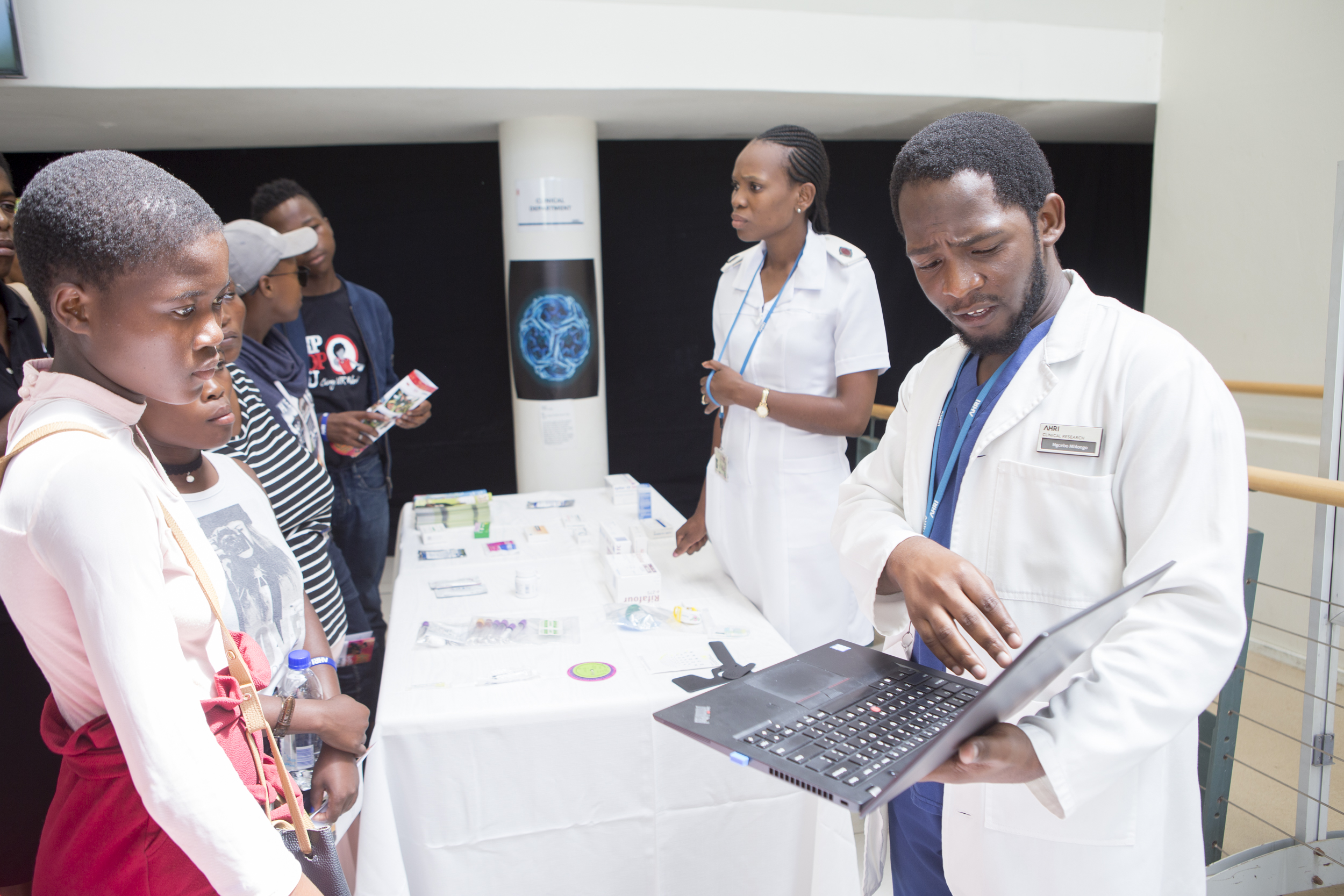 Above: Dr Ngcebo Mhlongo, a Research Medical Doctor at AHRI, with AHRI nurse Zandile Nkwanyana, describing their work to young people at the AHRI science fair. 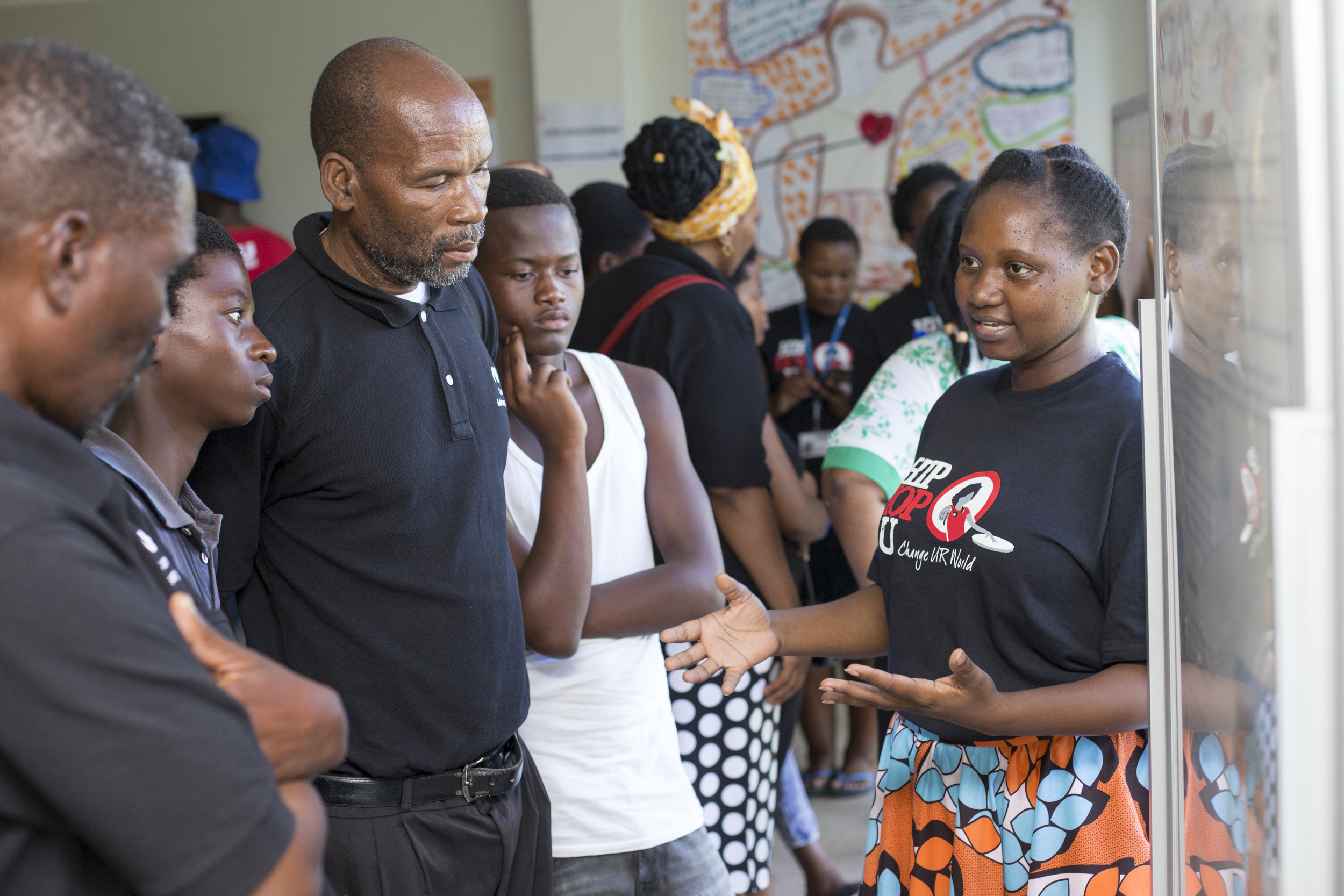 Above: AHRI study coordinator Vuyiswa Dlamini speaks with participants at the science fair.

Saturday’s event was the start of a new and exciting partnership between AHRI and young people living in the institute’s research area.

“We research HIV and TB as well as related diseases such as diabetes and high blood pressure. The real crisis in our setting is that young people are at increasing risk of getting HIV as well as other infections such as sexually transmitted infections, and we’ve got to do research which addresses the needs of those young people; that helps us understand and stop those young people being at risk,” said AHRI’s Director, Professor Deenan Pillay. “The only way we can do this is to work in partnership with young people. We need people far younger than me to tell us how best we can engage, and how best we can partner with young people – therefore young people themselves can take control of their lives, can make sure that they are safe, that they grow up healthy and that the next generation of people are not affected by these terrible diseases.”

More about the Hip Hop U process

Hip Hop U, an initiative of Jive Media Africa, creates an engagement space for young people, health researchers and popular music artists to collaborate on health-related challenges affecting our communities. Hip Hop U was implemented in three phases:

Saturday’s event was an opportunity for learners to present their knowledge and potential solutions to their guests and to the broader community. All the songs were recorded live and will be made available for widespread engagement around health-related issues.