Mobile phone-connected HIV tests, which link to online prevention and medical care, are being developed by a team involving Africa Health Research Institute (AHRI) researchers for use in South African communities hardest hit by HIV.

The new £600 000 (R10,5-million) m-Africa collaboration, for which funding was announced recently by the UK Medical Research Council (MRC), aims to build low-cost and user-friendly mobile diagnostic tests for HIV, and explore the use of an online app that allows a person testing to get their results and care, and potentially access to HIV drugs, from within their local community.

These mobile tests, which use ultra-sensitive techniques and advanced nanomaterials, could detect HIV at the very early stages of infection. This is when transmission is most likely and prevention most important. Apps will be designed to read out the results within minutes and also to interpret already available HIV tests, automatically linking results to a doctor and helping people receive the rapid and regular care that they need.

The team brings together outstanding clinicians, scientists, engineers and public health researchers from UCL, Imperial College and AHRI, with the primary goal of improving HIV prevention and delivering major health and economic benefits at the global epicentre of HIV. Their holistic approach builds on major breakthroughs in infectious disease prevention and care, including the first NHS online clinical care pathway for Chlamydia, smartphone-connected tests for virus detection and an annual household survey of 100 000 people in KwaZulu-Natal.

South Africa is the country most affected by HIV; almost seven million people are living with HIV and 300 000 people are infected with HIV each year. KwaZulu-Natal, where AHRI is based, is particularly affected. Forty-five percent of women attending antenatal clinics have HIV and only half all people diagnosed with HIV receive care within the following year.

AHRI recently led one of the world’s largest research trials in testing and treating new HIV infections in the community. They found that a key challenge was getting young people into the HIV clinics once they had been diagnosed, due to social stigma and the fact they couldn’t afford to miss work in order to come for an appointment. Community-based testing and care allows people to test with more privacy, away from the clinic, easing the burden on healthcare systems and helping people avoid the clinic visits they find so difficult.

“We aim to bring innovative m-health solutions to one of the biggest challenges of the HIV pandemic in sub-Saharan Africa; namely how best to maximise diagnosis, and then ensure optimal healthcare for those found to be infected,” explained Professor Deenan Pillay, Director of the Africa Health Research Institute and Professor of Virology, UCL. 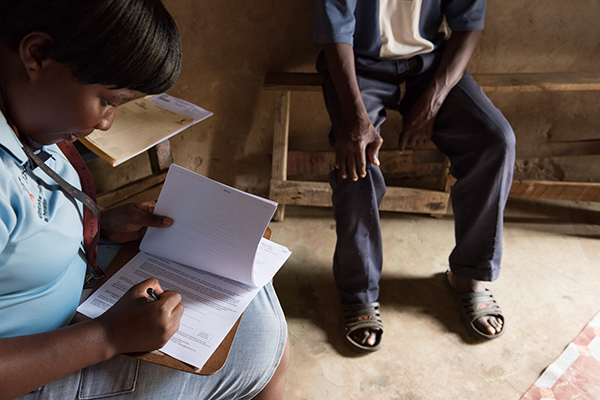 People in South Africa use mobile phones more than in any other African country; there are 76-million mobile phone subscriptions, and 11-million smartphones.

“Our interdisciplinary team will explore if key smartphone functions such as the camera can interpret HIV test results and securely send them to local clinics, supporting virtual follow up appointments and rapid treatment,” explains Professor Rachel McKendry, Professor of Biomedical Nanotechnology at UCL and Director of i-sense. “This Award lays the foundation for future product development and clinical trials, and ultimately aims to empower more people to get tested, especially those who have never tested before, and enable faster access to potentially life-saving treatment.”

“If successful, it could lead to major health and economic benefits for millions of people in South Africa,” adds Professor Molly Stevens, Research Director for Biomedical Materials at Imperial College London and Deputy Director of i-sense.

These innovative technologies are being developed for HIV in the first instance, but they can be applied across a range of infections and medical conditions and quickly integrated into the community, ultimately empowering patients to manage their own health.

m-Africa builds on the work of i-sense, an £11M UCL-led Interdisciplinary Research Collaboration (IRC), funded by the Engineering and Physical Sciences Research Council (EPSRC). i-sense brings together national and international partners with the aim of developing digital early warning systems to detect outbreaks of serious infections – including new strains of influenza, MRSA and HIV – much earlier than ever before, by linking self-reported symptoms on the web with mobile phone-connected tests.

This work is funded by an MRC Foundation Award. The Foundation Awards represent the MRC’s first phase of research funding as part of the £1.5bn Global Challenges Research Fund. The 41 Foundation Awards led by the MRC, and supported by AHRC, BBSRC, ESRC and NERC, have been allocated to support ambitious, novel and distinctive research in non-communicable diseases and infections, with the aim of improving the health and prosperity of low and middle-income countries through harnessing the UK’s research expertise.

He added: “These awards represent a significant win for global research. We hope that many of the research partnerships being supported will move on to even more ambitious work over the coming years.”

(Top photo: Blood is drawn for a rapid HIV test in a home in KwaZulu-Natal. All photos by Ben Gilbert, Wellcome)