K-RITH researchers have opened a new door to better understanding HIV’s impact on the immune system.

In a paper published in the journal Immunity, the scientists report that a recently identified class of immune cells called Innate Lymphoid Cells (ILCs) are lost from the blood immediately following HIV infection.

ILCs have an important role in the body’s response to infection and in maintaining immune system balance. Specifically, they help regulate homeostasis and inflammation and are involved in tissue repair. This study’s findings could be the first step to better understand the link between HIV infection, lymphoid tissue breakdown, and persistent immune dysfunction.

“We can see that the ILCs are eradicated from the blood during the first weeks following infection, and since we know that ILCs in general are important for maintaining balance in the immune system it is probable that this could have an impact on the development of Aids,” says K-RITH postdoctoral research fellow and first author on the paper, Henrik Kløverpris. 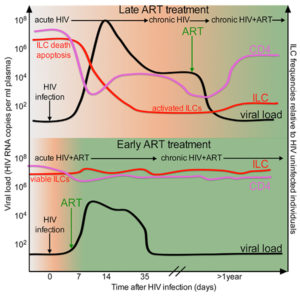 “Currently the mechanisms behind HIV pathology are not fully understood. There are some clues, but the full picture is not described,” explains Kløverpris. “The exciting thing is that these new cells may play a role in the pathology of HIV disease.”

Kløverpris came to study ILCs after a chance meeting with Jenny Mjӧsberg, one of the scientists to first describe the cells, and set out to investigate them during HIV infection. Even finding the cells, however, required setting up the technology in a different way – which Mjӧsberg provided guidance on. “ILCs are not easy to find; they are defined by what they don’t express, unlike other immune cells. This is probably why they were only discovered recently,” says Kløverpris. “You need to use different strategies to find them.”

Researchers don’t know yet if ILCs will help to solve questions around HIV pathology, but their working hypothesis is that they are an important part of the puzzle. The next step for Kløverpris is to understand ILCs’ role in the gut of HIV infected people at different stages of disease.

“It’s an opportunity to study HIV pathology from a different angle – and if we understand it better, we have a tool to try and find out how we can manipulate the system to prevent that pathology from happening,” he sums up