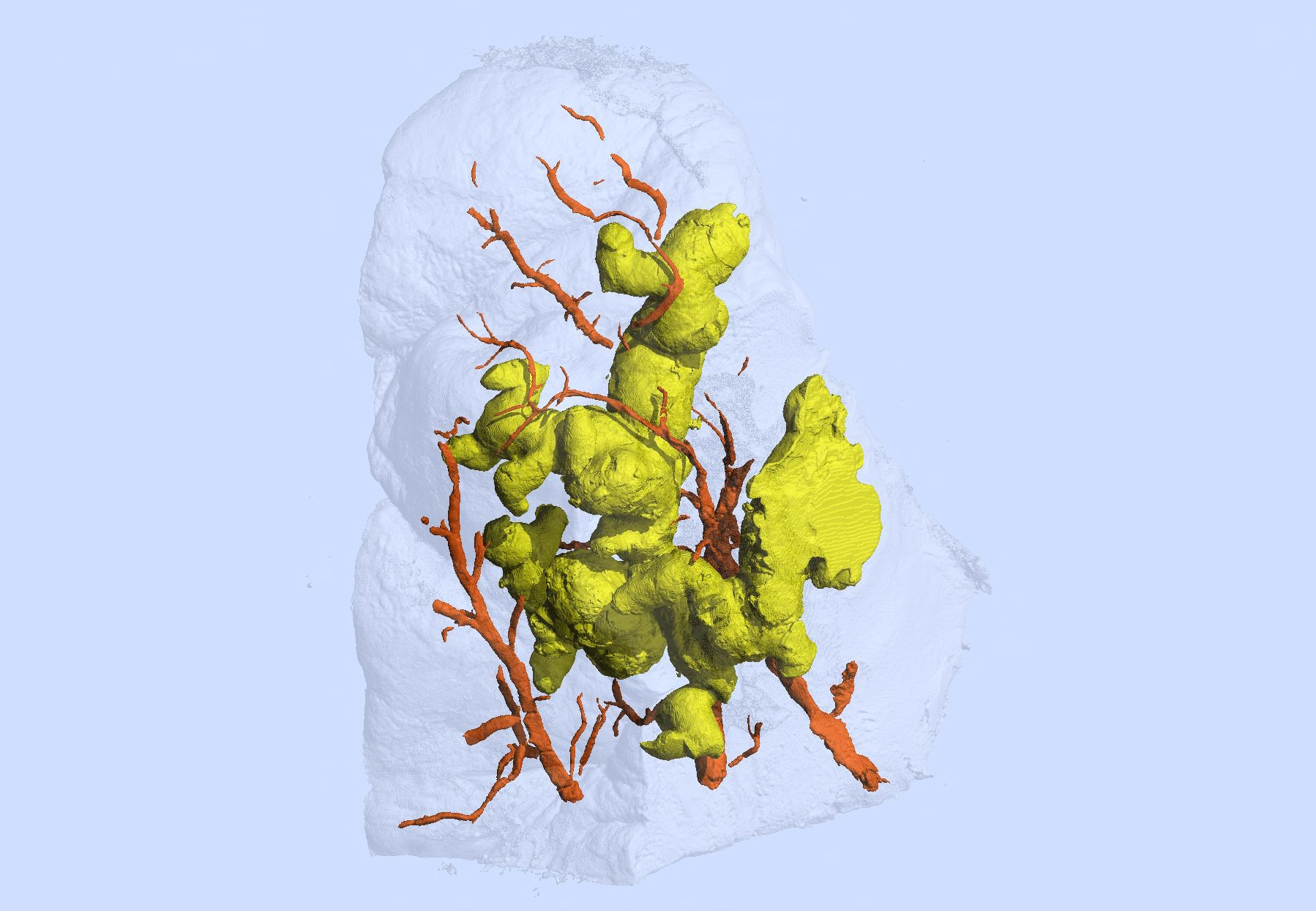 For 70 years, clinicians thought they knew the shape of tuberculosis granulomas in the lungs of patients. Histology — the study of microscopic structures in thin slices of lung tissue in the 1940s and 1950s — showed round features, and researchers intuitively assumed that meant the granulomas were spherical or ovoid.

That long-lived paradigm is now shown to be wrong, in a study by researchers at the Africa Health Research Institute (AHRI) and the University of Alabama at Birmingham (UAB). The historical histology, essentially, was a two-dimensional look at structures, similar to cutting a very thin slice through a tree branch, a slice that would look round or oval.

The new research has created a three-dimensional view of diseased lung tissue from tuberculosis patients, using micro-computed tomography, or microCT. This revealed that the larger granulomas were anything but round — rather they had complex, branched shapes. One granuloma looked somewhat like a ginger root, another like a cluster of early buds on a cherry tree, before the blossoms appear. The tuberculosis granulomas showed marked heterogeneity in shape, volume and number in the lung sections. (See this study link for videos of the three-dimensional views.)

A granuloma is an aggregation of immune cells summoned in response to chronic inflammation. In tuberculosis, the granulomas are often necrotic, meaning they are a mass of formless dead debris.

Researchers led by Prof Adrie Steyn, a member of AHRI faculty and a UAB professor of microbiology, used microCT, histology and immunohistochemistry to construct three-dimensional views of necrotic granulomas, and also vasculature and airways. This yielded an unanticipated insight into the spatial organization of tuberculosis granulomas in relation to airways and vasculature.

“Unlike depictions of granulomas as simple spherical structures,” Steyn said, “human necrotic granulomas exhibit complex, cylindrical, branched morphologies that are connected to the airways and shaped by the bronchi.”

Steyn says these visualisations have three impacts. They highlight the likelihood that a single structurally complex lesion could be mistakenly viewed as multiple independent lesions when evaluated in two dimensions. Second, the lack of vascularisation within obstructed bronchi establishes a paradigm for anti-mycobacterial drug tolerance, since the microbes are protected from a full delivery of blood-borne bactericidal drugs. Third, the results suggest that a bronchogenic spread of the Mycobacterium tuberculosis pathogen re-seeds the lung.

“Hence, our findings provide a rationale for considering aerosolised anti-tuberculosis drug delivery,” Steyn said. “This approach could allow delivery of high, local concentrations of drugs directly into granulomas or cavities in the lung, possibly reducing treatment times, systemic dosing and toxicity.” Infections by the Mycobacterium tuberculosis bacterium kill about 1.3 million people a year.

Steyn and colleagues say, to their knowledge, this is the first three-dimensional description of granulomas, airways and vasculature for any bacterial pulmonary pathogen.

Through a unique collaboration with cardiothoracic surgeons and patient donors at Durban hospitals, AHRI researchers have access to samples of infected lung tissue removed during life-saving surgical procedures called lung resections. MicroCT is similar to the common medical CAT scans but has a much finer resolution. The researchers used resolutions as small as 12 microns, which is about the thickness of a sheet of plastic kitchen wrap.

The study, “µCT Analysis of the Human Tuberculous Lung Reveals Remarkable Heterogeneity in 3D Granuloma Morphology,” was published in the American Journal of Respiratory and Critical Care Medicine. The journal also published an editorial on the Steyn study.