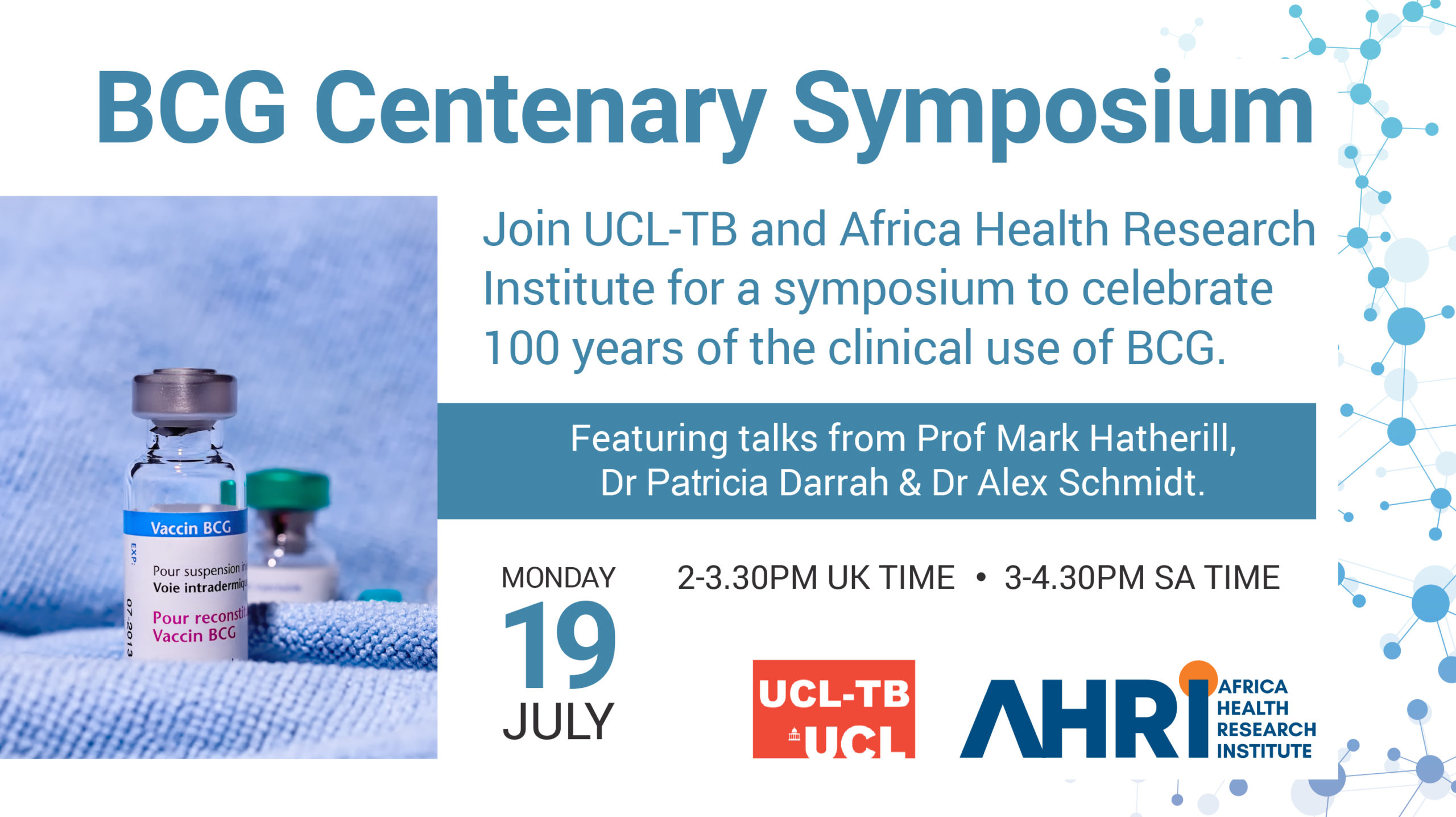 In July 1921 the first dose of BCG was administered to an infant in a hospital in Paris. 100 years later it remains the only available TB vaccine and is the most widely used vaccine globally, still given to >100 million children each year.

To mark this milestone, the UCL-TB/Africa Health Research Institute BCG centenary symposium presented three talks from leading academics followed by a panel discussion to explore the impact of BCG as a vaccine and immunotherapy, what we are still learning about protection against TB from study of BCG, and the future pipeline for TB vaccines.

Catch up with a recording of the symposium below.

BCG, a live, attenuated, bacterial vaccine derived from Mycobacterium bovis, was first administered as vaccine against TB in on 18th July 1921.  It remains the only available TB vaccine and is the most widely used vaccine globally still given to > 100 million children each year. This talk discussed what is known about the impact of BCG vaccination on the prevention of TB infection and disease, the heterogeneity of vaccine efficacy and duration of protection. In addition, it covered what is understood about the non-TB specific effects of BCG and the role of BCG as cancer immunotherapy.

Professor Mark Hatherill is Director and leader of the clinical research team of the South African Tuberculosis Vaccine Initiative (SATVI), University of Cape Town. A University of Cape Town medical graduate, he trained as a pediatrician and critical care sub-specialist. Since 2005, SATVI has conducted 28 clinical trials of nine novel TB vaccine candidates involving almost 6,000 participants, in addition to large epidemiological and immunological cohort studies. Prof Hatherill played a lead role in efficacy trials that tested the candidate vaccine MVA85A for prevention of TB disease in infants; BCG revaccination for prevention of M. tuberculosis infection in adolescents; and the candidate vaccine M72/ASO1E for prevention of TB disease in adults. He is Co-PI of the Regional Prospective Observational Research in Tuberculosis South Africa consortium. His current work focuses on the design and implementation of clinical trials of novel TB vaccines and biomarker-targeted TB prevention.

As intradermal (ID) BCG administered at birth has variable efficacy in preventing pulmonary TB in adults, a major goal of our work is to investigate alternative routes of vaccination that may elicit cellular immunity in the lung sufficient to protect against TB disease. We recently published that BCG given intravenously (IV) elicited robust lung-resident T cell responses and provided a high level of protection against infection and disease compared to the same dose of BCG given ID or by aerosol. These data establish a benchmark of protection in a highly susceptible rhesus macaque model and provide an opportunity to study immune correlates and mechanisms of protection to facilitate proof-of-concept studies in humans.

Dr Patricia Darrah received her PhD in Microbiology & Immunology from Temple University School of Medicine in 2001. Since then, she’s worked in the Cellular Immunology Section of the NIH Vaccine Research Center studying how various vaccine platforms shape the magnitude, quality, breadth, and tissue distribution of CD4 and CD8 T cell responses after immunization. Tricia currently leads the VRC TB Unit under Robert Seder & Mario Roederer, investigating the immunogenicity and efficacy of new vaccines against tuberculosis in a pre-clinical nonhuman primate model.

Dr Alex Schmidt serves as Head of Vaccine Development at the Gates MRI. He joined Gates MRI in 2018 after seven years with GSK Vaccines, where he led vaccine development programs for dengue, RSV and influenza virus vaccines. Prior to GSK, Alex spent 10 years in the NIH intramural program, where he led a lab-based team and worked on translational and clinical development for viral vaccines. Alex received his M.D. from Freie Universität Berlin, trained in pediatrics at Charité and at The German Heart Center, and held a faculty position in pediatrics at Charité.