The art of science: AHRI hosts an exhibition of the Wellcome Image Awards 2017

Twenty-two of the world’s most incredible science images are on display at the Africa Health Research Institute (AHRI) in Durban for the next month.

The Wellcome Image Awards 2017 showcase the best in science image making, and include a broad range of cutting-edge artistic and scientific techniques. From photography and illustration to super-resolution microscopy and medical scans, the images use a variety of methods to capture the imagination and bring complex concepts to life.

Now in their 20th year, the Awards recognise the creators of informative, striking and technically excellent images that communicate significant aspects of healthcare and biomedical science. This year’s award-winning images include a beautiful illustration of Nobel laureate and neurobiologist Rita Levi-Montalcini, a glimpse at the intricate system of blood vessels inside an African Grey Parrot and a fascinating visualisation of Twitter conversations about breast cancer.

(Above: Cat skin and blood supply – David Linstead. A polarised light micrograph of a section of cat skin, showing hairs, whiskers and their blood supply. This sample is from a Victorian microscope slide. Blood vessels were injected with a red dye called carmine dye (here appearing black) in order to visualise the capillaries in the tissue, a newly developed technique at the time. This image is a composite made up of 44 individual images stitched together to produce a final image 12 mm in width.)

The images will be shown at exhibitions held across the UK, Russia, online and at AHRI on the University of KwaZulu-Natal’s Nelson R. Mandela School of Medicine campus. The AHRI exhibition will move to the UNIZULU Science Centre in Richards Bay in May 2017.

“We are so pleased to be hosting an exhibition of the Wellcome Image Awards. The visual image is a key medium through which the complexity of science and nature can be made understandable. The images are beautiful to look at, but also uncover a fascinating world that is usually hidden to the eye – as well as to the non-specialist researcher. They will, I believe, delight and inform – whether you are a school pupil or senior scientist,” said AHRI Director, Professor Deenan Pillay. 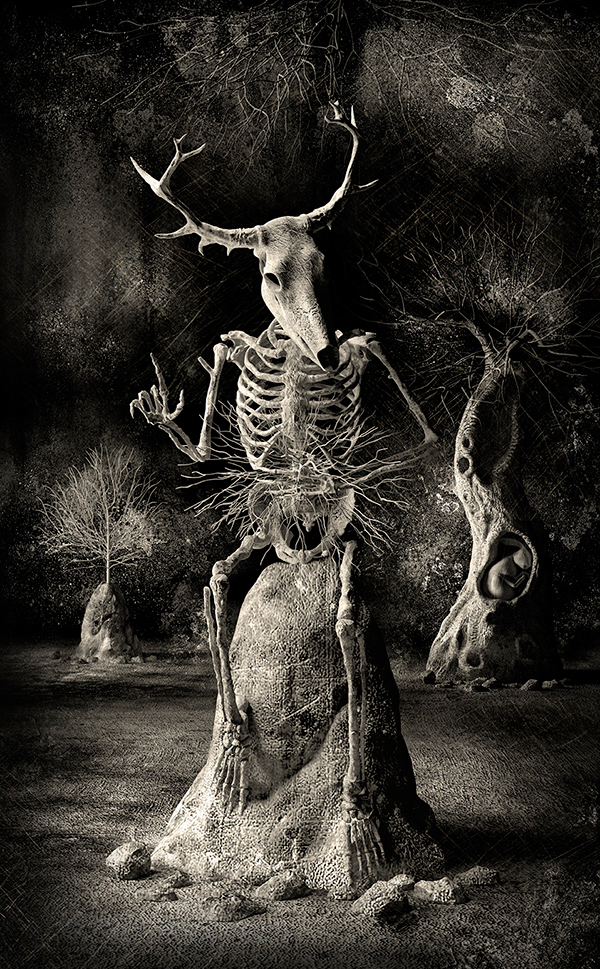 (Above: Stickman – The Vicissitudes of Crohn’s (Resolution) – Spooky Pooka. This image is part of a series called Stickman – The Vicissitudes of Crohn’s. Its images are based around the character Stickman, a proxy or alter ego of the artist, who suffers from Crohn’s disease. He is made of sticks rather than bones and references the associated symptoms of weight loss, the body’s fragility following a flare-up, and the abrupt, transformative nature of Crohn’s. Here, Stickman is chastising his creator, the artist, for deriving artistic inspiration from his illness. However, this is ultimately an image of hope and regeneration, as suggested symbolically by the stick thrust into the earth and the hare in the tree’s womb. Overall winner)

The Wellcome Image Awards were established in 1997 to reward contributors to the Wellcome Images collection for their outstanding work. Over the past 20 years as science and technology has progressed, the awards have embraced new styles and pushed the boundaries of science image making. 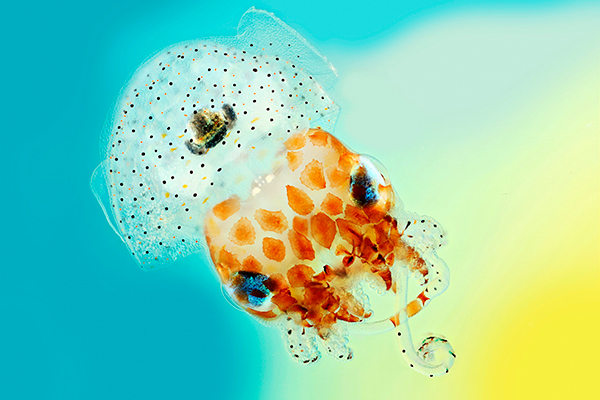 (Above: Hawaiian bobtail squid – Mark R Smith, Macroscopic Solutions. Native to the Pacific Ocean, Hawaiian bobtail squid are nocturnal predators that remain buried under the sand during the day and come out to hunt for shrimp near coral reefs at night. The squid have a light organ on their underside that houses a colony of glowing bacteria called Vibrio fischeri. The squid provide food and shelter for these bacteria in return for their bioluminescence.)

“It’s now 20 years since the first Wellcome Image Awards and we continue to be surprised and delighted by the range of extraordinary images we receive each year. We are thrilled that they will be displayed across the UK and abroad so that people can come and explore the stories behind these stunning images,” said Catherine Draycott, Head of Wellcome Images and chair of the judging panel.

The 22 winning images were chosen by nine judges from all those acquired by the Wellcome Images picture library in the past year.

(Top image: #breastcancer Twitter connections – Eric Clarke, Richard Arnett and Jane Burns, Royal College of Surgeons in Ireland. (Image cropped) This is a graphical visualisation of data extracted from tweets containing the hashtag #breastcancer. Twitter users are represented by dots, called nodes, and lines connecting the nodes represent the relationships between the Twitter users. Nodes are sized differently according to the number and importance of other nodes they are connected with, and the thickness of each connecting line is determined by the number of times that a particular relationship is expressed within the data. The ‘double yolk’ structure at the top of the image indicates common mentions of two accounts. This area of the graph provides a graphical expression of trending data in Twitter, as it represents one tweet that was retweeted thousands of times.)

*The Wellcome Image Awards 2017 exhibition runs at the Africa Health Research Institute, on the University of KwaZulu-Natal’s Nelson R. Mandela School of Medicine campus in Durban, from 24th March to 24th April. Pre-arrange visits via events@ahri.org. The exhibition then moves to the Unizulu Science Centre in Richards Bay and opens on 22 May, 2017.