Africa Health Research Institute (AHRI) celebrates three PhD graduates and one Master’s student this year. Dr Lynne de Welzen, Dr Ngomu ‘Akeem’ Akilimali and Dr Thembelihle Zuma have graduated from the University of KwaZulu-Natal with their doctorate degrees and Nicole Reddy has graduated with a Masters of Medical Science in Virology .

Dr Thembelihle Zuma explored the role of traditional health practitioners (THPs) in the context of HIV/AIDS and the wide availability of antiretroviral therapy (ART). Findings from her doctoral study indicated that THPs remain a significant source of healthcare to the members of their communities, largely to deal with aspects of illness requiring spiritual and psychosocial healing. Therefore, their use continues despite wide accessibility to HIV testing and wide availability of ART.

“This PhD is a path, not an end,” she said. “During the process I learned a lot of things from my supervisors and from fellow colleagues. I also taught other people a few things! I enjoyed the learning-teaching experience. I also transformed as an individual, which is one of the valuable lessons, to know that I can; we can!” 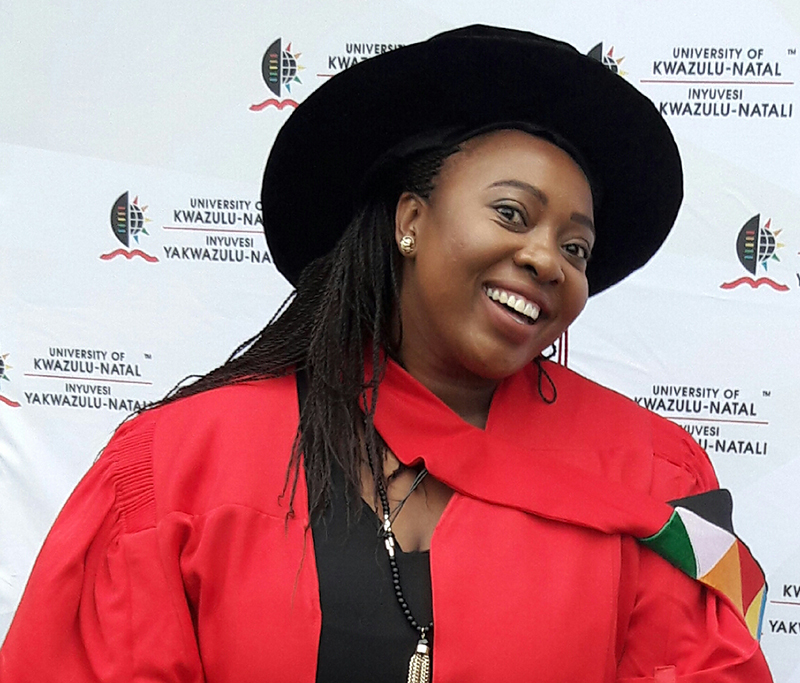 (Above: Dr Thembelihle Zuma on her graduation day)

For his PhD, Dr Ngomu ‘Akeem’ Akilimali did seminal work on the identification of biomarkers and the immunopathogenesis of Cryptococcosis-Associated Immune Reconstitution Inflammatory Syndrome (C-IRIS), a clinical complication experienced by some patients with HIV- associated Cryptococcal Meningitis (CM) who are initiating antiretroviral therapy. His findings may help to improve diagnosis suggestions and further clinical interventions. Akeem’s work has been published in the high-impact factor journal Clinical Infectious Diseases, and he has other work under review. He has just taken up a postdoctoral fellowship at Emory University in the USA.

Akeem arrived in South Africa as a refugee from the Democratic Republic of the Congo, not able to speak English. He worked his way through undergraduate studies at UKZN, did a Master’s degree at the HIV Pathogenesis Programme and finally a PhD as part of Prof Thumbi Ndung’u’s group at AHRI. Read more about Akeem’s remarkable story here. 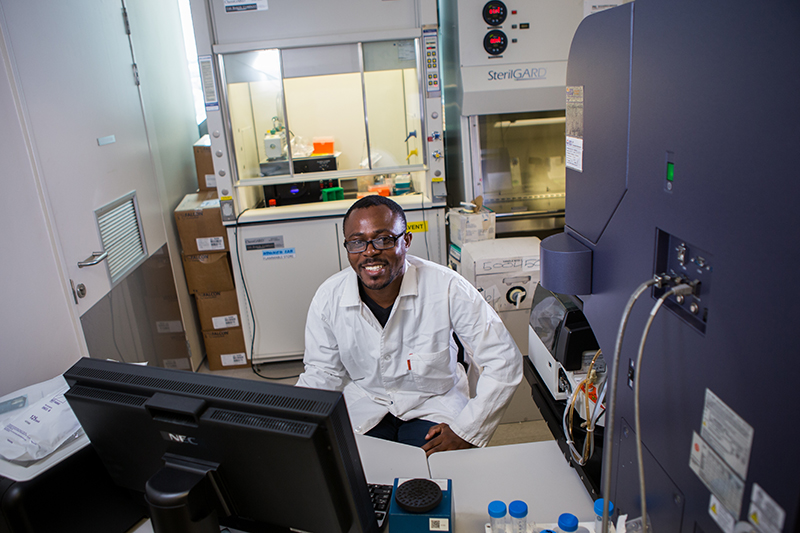 (Above: Dr Ngomu ‘Akeem’ Akilimali in the lab at AHRI)

Dr Lynne de Welzen, who started her PhD journey at AHRI in 2013 when she was only 22 years old, says that she is ecstatic and feels proud of her achievement.

“I have grown immensely as an individual and scientist over this time. It has been a very long and tough journey, at times, but I have learnt so many lessons – such as how to be patient, how to persevere and never give up, and how to interact with different individuals and personalities.”

Lynne’s PhD research focused on identifying new mechanisms of drug resistance in Mycobacterium tuberculosis, the bacterium which causes TB, by focussing on the bacterium’s gene regulatory system. The process involved RNA extraction, RNA sequencing, and comparative whole genome (DNA)- transcriptome (RNA) analysis of drug susceptible and drug resistant clinical strains of M. tuberculosis. This type of comparative analysis allowed for the identification of mutations which could account for observed changes in gene regulation.

“My study identified and verified, using a flow-cytometry based assay, two such mutations, one of which resulted in a reduction of expression of a monooxygenase (EthA), which plays a vital role in activating and essentially allowing an anti-TB drug called ethionamide to work effectively. After testing a range of other clinical strains with this mutation, it was found that this mutation causes drug resistance to ethionamide.”

Her study also identified other differentially regulated genes and mutations which could contribute to drug resistance or to maintaining bacterial fitness in M. tuberculosis. 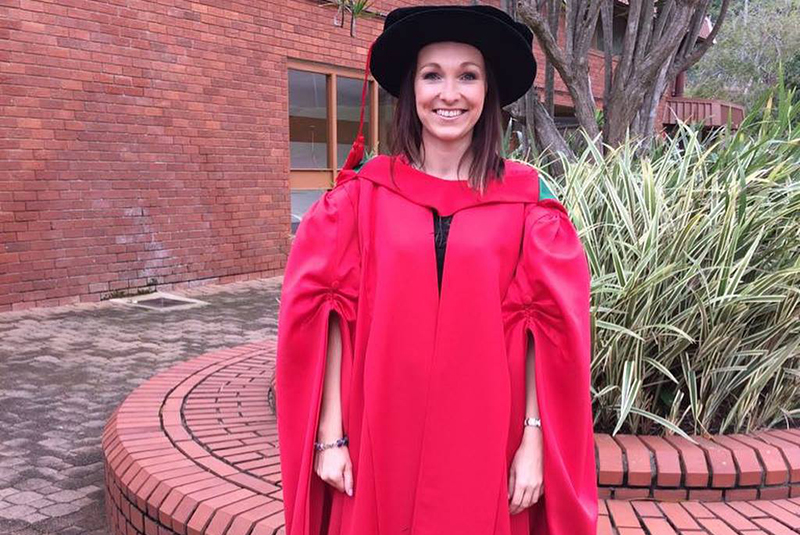 Nicole Reddy’s research project at AHRI focuses on how the body fights HIV infection and more specifically the workings of the body’s immune proteins that are known to block or fight off HIV infection. Her Masters project, under the supervision of Professor Thumbi Ndung’u and mentorship of postdoctoral fellow Dr Kavidha Reddy, sought to characterize an important component of the human innate immune system called APOBEC3 proteins and its interaction with HIV.

Studying the interplay between these human proteins and the virus may lead to development of new therapies or vaccines, particularly for populations burdened heavily with HIV. For her PhD, Nicole hopes to extend her study to investigate the APOBEC3/HIV interaction in greater detail. 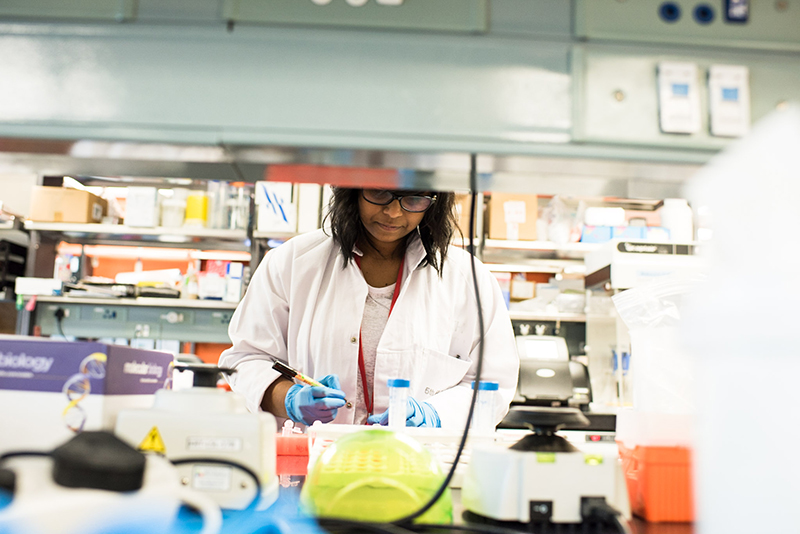 (Above: Nicole Reddy in the  lab at AHRI)