Patience Shumba and Vanisha Munsamy (pictured below), both from AHRI’s Pym Lab, say they are thrilled to be graduating. Patience Shumba’s project aimed at developing a fluorescent and flow cytometry based method of isolating antibiotic tolerant M. tuberculosis. The work will aid in identifying potential drug targets for TB drug development. Vanisha Munsamy’s project used whole genome sequencing to identify novel mutations associated with drug resistance in TB. Her work will help to improve rapid molecular diagnostics required for the development of tailored patient treatment regimens. 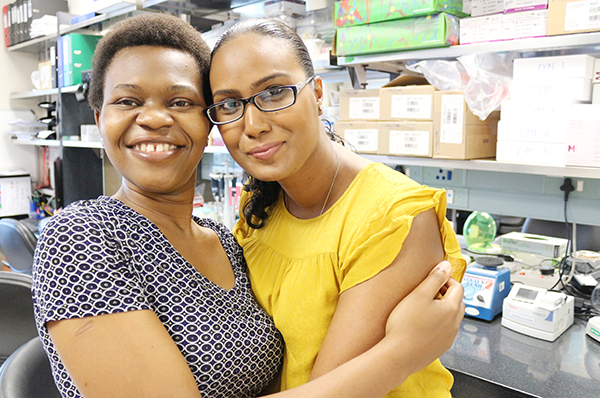 We caught up with (the soon to be!) Dr Jared Mackenzie – pictured at top – to find out more about his PhD research, which was done in AHRI’s Bioengineering Lab.

Would you tell us more about your PhD project?

In the AHRI Bioengineering Lab we use microfluidics technology to answer biological questions. Microfluidics allows us to scale systems down to a ‘lab-on-a-chip’. For my PhD I used a microchemostat—a device that my supervisor, Dr Frederick Balagaddé, developed. To give you some context on size, a conventional chemostat can be as big as a room; however, the microchemostat has been developed to be as small as a credit card.

Using this device, I worked on a TB-based project that focussed on the role of efflux pumps. Efflux pumps are transporters found in bacteria and other cell types that are used to maintain an equilibrium within the cell. Recently, there has been increased interest surrounding these pumps as they have also been found to pump out anti-TB drugs. These drugs need to accumulate within the bacteria to be effective. Therefore, if they are pumped out before they can reach lethal concentrations, their effect will be greatly diminished. The main problem with studying the TB efflux system is that there are so many different pumps present (roughly 80 different efflux pumps). This makes it extremely difficult to study them in isolation as many perform the same function (functional redundancy).

To overcome this obstacle, we collaborated with Dr Alissa Myrick from H3D at the University of Cape Town. She has developed E.coli strains  that have individual TB pumps cloned into them whilst their own pumps have been removed. This gives us the unique ability to study these TB pumps in isolation, thereby removing the possible confounding effects of other transporters. We were then able to culture these strains in the microchemostat. A chemostat allows for the culture of cells over a very long period of time. Therefore, growing these cells in the microchemostat allowed us to observe the long-term effects of efflux pumps on cell growth in response to drugs and other factors.

Our main finding in this study was that the Rv1258 efflux pump conferred a high level of resistance through two different drug resistance phenotypes (characteristics). The first phenotype consisted of small cells that actively divided and pumped out the drug. However, the second phenotype consisted of bacteria that were not effluxing, became elongated and stopped dividing. This second phenotype is important as most TB drugs rely on bacteria to be actively dividing to achieve rapid killing.

This study also showed that we were able to develop a system that can address the challenge of functional redundancy when studying TB, and enable researchers to more cleanly pinpoint drugs extrudable by the pump.

Are you excited about the results?

It’s so nice to see all your hard work pay off in the end. When we first started the project we had an end goal, but it’s changed so much since then. It’s a very different project to what we started out on, and it’s nice to see how it has evolved, and in particular that we’ve shown something novel. I am also pleased that we filed a patent from the work – which describes the method we developed to screen for  drugs that aren’t pumped out of the bacteria. There is also a paper in the pipeline!

What is next for you?

I will be staying on at AHRI as a postdoc, working in collaboration with the Steyn Lab. We aim to develop a high throughput microfluidic device to screen for TB drugs, with the hope of shortening the time to finding those drugs that can actively kill TB.